After my recent experiences with the LG Watch Urbane I was left wanting something a bit simpler. It left me in search of a device that would track the fitness statistics that I desired but not replace my watch. Up until this point, I had only a passing familiarity with the Fitbit line of fitness devices and an even more limited knowledge of their competitors. When looking into the fitness landscape it became evident that my desire to have a screen less device severely limited my options. The out of the nowhere, the Misfit Ray presented itself as the perfect option for what I needed.

In search of style

When researching fitness trackers, I noticed that many are not that attractive. At their core they are best suited for those that run and work out on a regular basis as they are designed to look best with workout attire. The Misfit Ray stood out to me as something that didn’t fit this mold. It’s simple design give it much more style than many of its contemporaries and this simplicity would allow it to blend in with my overall personal style. The fact that this metallic cylinder could easily be accessorize and slipped into my pocket were attributes that became major selling points in my mind. 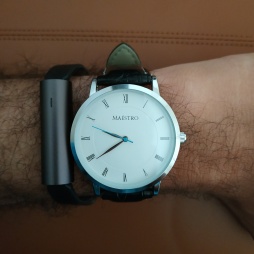 A draw back for some will be that the Misfit Ray does only two things; step tracking and sleep monitoring. As I don’t usually participate in any sort of heavy workout on the regular, the limited functionality of the Ray was exactly what I was looking for. As the Ray does not have a physical display, you will have to heavily rely on your phone to get a window into your daily stats. As a result the performance of the associated Misfit app is key to the utility of the Ray. When compared to other related apps that I have used (specifically those by Google, Microsoft, & Fitbit), the Misfit app works well and gives a reasonably detailed representation of daily stats. It is head and shoulders about the offerings from Microsoft and Google, but just hair below the one from Fitbit.

Since it is first and for most a fitness tracker, it’s ability to this is key to the device’s overall success. When compared to my previous usage of the LG Watch Urbane, the Misfit Ray gives a more accurate account of my steps and activity that the LG. My biggest satisfaction comes in its sleep monitoring capabilities. I have found this capability to be highly accurate and gives a great window into my own sleep patterns. The one drawback is that if you are just lying in bed watching a movie or binge watching something like GLOW it could think that you are taking a nap.

The Price is Right

The Misfit Ray originally retailed for $99 when it first debuted a few years ago. At that time I would have argued that it was way too expensive considering its limited feature set when compared to its then competitors. Today you can get a base model Ray from the Misfit website for just $40 before any promotional discounts are applied. At this price point, the Ray is an enticing option (in my opinion) for anyone that is looking for a fitness tracker that is simple.

If you have gotten this far down the page then will not be surprised at the final verdict. The Misfit Ray is both accessory and utility that strives to blend into or compliment one’s style while fulling basic fitness tracking needs. When you roll in its extensive options for customization, limited smart home integration, and its $40 and under price tag it’s a device that just can’t be beaten if you are looking for something on the simpler side of things. Those that are looking for a more robust fitness tracking experience need to look elsewhere.