My hometown is known for many things including Orioles, Ravens, crab cakes, and The Wire. However one of the overlooked crown jewels of the city is the annual Baltimore City Comic Convention. The annual confluence of nerddom (technical term) that takes place in Charm City every year is one that consistently elevates its game to attract a wider audience while successfully appealing to its core audience that has sustained it for years. 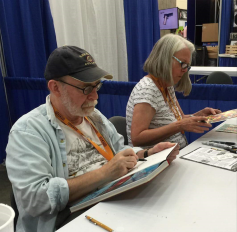 This year’s convention featured an ever-growing slate of comic creators both established and those just getting their feet wet in the comics world. Industry legends included the likes of Walter and Louise Simonson (pictured right), Kevin Eastman, Neal Adams, and Ron Martz. In addition to these icons of the industry, the show floor was littered with vendors of all types of wears, comics, and established creator including Greg Pak, John Layman, “Superman killer” Dan Jurgens, and Greg Horn. As usual the slate of creators that were present rivaled any other con around. Not to mention that the comic equivalent to the Oscars, The Harveys were held during the convention. This only brought out more industry heavy hitters to Baltimore. 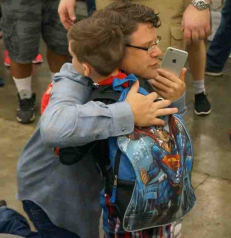 This year’s convention featured many media guest highlighted by the appearance of Sean Astin. The Goonies and The Lord of The Rings star made his way around the convention to the delight of many and certainly made his presence felt with con goers. Also in attendance was the Arrow‘s Michael Rowe (Deadshot) and Game of Thrones’ Kristian Nairn (Hodor). Of all the media guests, we were most smitten (for obvious reason) by the lovely Haley Atwell (Agent Carter) and Candice Patton (The Flash). After meeting Ms. Atwell, it just makes the desire to see a season third of Agent Carter burn even stronger. 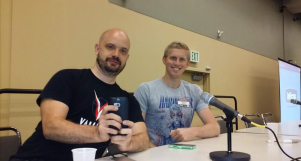 The panels of Baltimore Comic Con once again showed that the event is strictly geared toward the fans. Major publishers like Valiant and DC once again entertained the fan to stories about their respective universes, with DC maybe hinting that the Legion of Superheroes will be returning soon. While many fan groups successfully executed panels including ones on DIY cosplay and discussing the diversity the of comics, both on the printed page and on the creator side of things.

As always, the cosplay community attended the convention in full force. The costumes (and costumers) ranged from the very young to the very old, from the off the shelf costumes to the professional that sews and molds every piece of their outfit. All range of cosplayers, and more importantly fan were represented. It was a great time to be in costume or to just be an admirer of those that do dress up.

As stated, the Baltimore comic com continues to consistently elevate its game to attract a wider audience while successfully appealing to its core audience that has sustained it for years. We can’t wait to see how it continues in 2017.