It’s amazing how technology changes our lives and in some instances it makes us much lazier in doing so. Before there was “Netflix and chill” there was “Blockbuster and chill” and it required just a little more work in that you and your date may actually have spent some time at the video store deciding on what movie to pick out and also possibly having a Plan B or C in case your first option is gone. Part of doing this allowed you time to further get to know your date, really understand what they liked and just get an idea of how they were out in public. For the most part, these outings could be fun even if the store was a short jaunt or car ride away.

But, it’s been replaced with ‘Netflix and chill’ and even though technology has changed, the concept behind this still hasn’t. Not to mention, some people still need to master how to use it!

To define, the Urban Dictionary says, “A subtle way to lure [someone] to come over to your place, initially as just a “friend”, so that it can lead to an opportunity of getting intimate with [them] while something is playing on Netflix.

This is not to be confused with a booty call, then again…if the end goal is to get some booty, it totally is!

If you are one of the few people that still haven’t been successful, then take a few notes before the ‘next time’.

N&C is NOT the first date option!

As I stated above, because picking a movie on Netflix requires a lot less effort than taking hits or misses at the extinct video rental store, you still have to make an effort and take your date OUT IN PUBLIC  and at least get to know them! Eventually, the N&C requires them to come to your place and if you weren’t getting a good vibe with them publicly then why would you want them in your space for 1 and a ½ plus hours watching a flick counting down to when they are leaving? Everybody wants to chill but everybody isn’t worth chilling with!

At least put Netflix on your TV

Seriously, your idea was you and your date smushed together in an attempt to watch on a tiny tablet?  Wait, did you actually just try to do an N&C of The Ridiculous Six on your iPhone 6? Why are you even watching The Ridiculous Six?  Are you out of your mind??? No. Don’t do that. There are so many ways to properly set it up on that 55” TV that you are trying to impress, which makes that 10” tablet inexcusable. If you have a gaming system, blu-ray player, a smart TV or even the ability to stream from your tablet TO your TV then you are bereft of excuses. Wait…what did you say you were doing with your laptop??   Plus consider this, if you were trying to get handsy while watching, you can’t do it if your hands are full because you’re trying to hold the tablet!! Figure out how to take ten minutes to get Netflix working on your TV because it’s nothing worse than trying to get your swerve on and before you know it, you move the wrong way and your precious little Netflix device is shattered on the floor because you dropped it as they touched you right.

Know your audience also known as…this is NOT YOUR NIGHT.

This is why you spend time doing what I said above regarding the first date. As you are hanging out (and possibly doing this a few times before pushing for the N&C option) take the time to know your date. Unless they are into it as well, do NOT try to get them to watch the entire unabridged Lord of the Rings trilogy the first time out!

**Sidebar: I know some of you just said that LotR is not on Netflix. Yes, I know that. Just keep in mind that N&C can constitute any option where a movie will be streamed including Hulu, Amazon, Crackle, Crunchroll…etc.

Avoid foods that give ‘itis or gastric distress.

There is nothing more fun watching a movie than doing so while eating food, but if if you are doing N&C in the chances of getting some good sex, do not opt to eat heavy which of course will have you dreaming about the sex you wish you were having. There is nothing sadder than you and your date snoring and drooling just before Frodo escapes from the Balrog. They are asleep because they hated your movie choice and you are asleep because you just had to cook chicken, mashed potatoes, broccoli, corn and muffins.  On the flipside, stay away from spicy foods that will cause you to blow up the room. No, you are not easing them out, you aren’t holding them in and eventually, one will come through that singes nasal hairs. And come on, SBDs are really viscous and they suck. If you feed spicy foods to your date, trust me, both of you are playing the waiting game of who is going to pop first. Let’s not front, you’re still probably at that level where farting around your date is not cool yet. And even if you got one that says that they are cool with it, they really may not be. God forbid if they let one rip and it’s worse than yours.  Here is an idea, if you really don’t want to do the popcorn move, even though it’s classic, try substituting popcorn for grapes which of course can lead to some handsy moments, M&Ms, getting some ice cream (hey! Your date isn’t lactose intolerant are they?), or fresh fruit. Some of you may just want to do veggies but please stay away from asparagus spears.  Believe it or not, I recommend pineapples and here is why. You will  thank me later.

Better to have it and not need it… 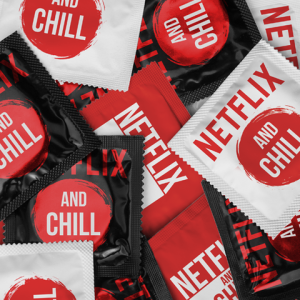 Ok your N&C is going as planned and you are prepared to smash but, did you remember to get some protection? No? So you want to start planning out what the kids are going to be watching in the Netflix queue as well huh? No? So you want to try to get that messy case of syphilis cleared up because you just realized that you aren’t the only person your date is doing the N&C with. Well don’t forget, if you made it this far,  wrap it up and if you were extra prepared, keep a variety around including for those who are allergic to latex. 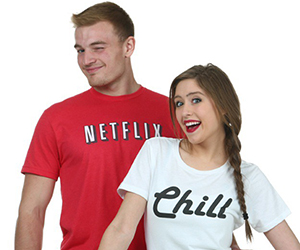 Also, remember don’t be too eager. At least make an ATTEMPT to chill…it’s in the word. Be smooth about it and let it happen naturally. If you are just trying to smash, get a booty call or a FWB and forego all of the niceties. If it happens, it happens…if not, keep trying! Netflix may have changed the game, but trying to play and get an end result is still the same!

Founder of The Next Issue Podcast and Pop Culture Uncovered, Harry has been reading comics since he could reach a news stand. He is also a cosplayer with his current favorite role as being Bishop, of the X-men. He is a fan of Marvel, Image and DC and is really passionate about making sure that kids get the opportunity to read. This leads him to getting out to places with comics that others no longer need and putting them into the hands of kids who will treasure them. His favorite comic characters are Batman, Spider-man, and Tony Chiu. View all posts by Harry C.

1 thought on “Perfecting the art of Netflix and chill”