Finding fine menswear isn’t always an easy task. With the increased consolidation of menswear into big box department stores and large chain specialty shops, finding a place where one can get the quality, intimate treatment of yesteryear. The classic haberdashery is in many ways simply a longed for afterthought from a past where the relationship a between a man has tailor was akin to that of his barber; it was intimate and filled with trust. In many places the haberdashery has been forgotten, however the haberdashery is alive and well in St. Paul courtesy of Heimie’s Haberdashery (Heimies.com).

Heimie’s has a long storied tradition in the St. Paul area. The original tailor was stared by current shop owner Anthony Andler’s grandfather Heimie after he immigrated from Russia during the Russian Revolution in the 1917. After World War II, Andler’s father Ralph and grandfather turned the tailor shop into Heimie’s Menswear, a full service shop that offered ready-to-wear garments in addition to tailoring services. Heimie’s Menswear stood until Ralph retired in 1993. After many years of owning an art gallery for many years, Anthony decided to honor his father and grandfather’s legacy by opening Heimie’s Haberdashery in 2004. 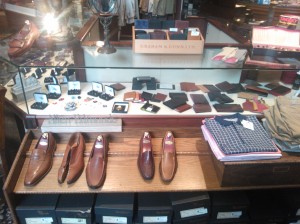 When stepping into Heimie’s Haberdashery, it is very much like taking a trip into the past as the store is decorated with many advertisements from era’s gone by. The shop is literally wall to wall style. From hats to suits, to ties, to custom tailoring, Heimie’s has it all. It even has a full service barbershop that offers shaves done the old fashion way. This is also in addition to the small cigar shop that it has tucked away just off the barber shop. The shop also specializes in handcrafted leather handbags and hunting gear that are designed by Andler himself.

As we see it, the gentlemen of the Twin Cities are lucky to have such an establishment. From the knowledgeable and helpful staff to the sheer selection of menswear and services, Heimie’s Haberdashery is a bright light in the world of men’s wear.