Isis the Amazon is a 6’9″ professional wrestler, model, and actress from Miami,

FL. Having began her wrestling career in 2008, she has wrestled  for various organizations including Rampage ProWrestling, GCW – Global, CCW – Coastal, World Wrestling Council, SECW- South East, and PGWA- Lady Sports. Isis is  determined to take over the worlds of wrestling and entertainment one power bomb at time.

1. In your own words who is Isis the Amazon?

The best part of being named after the great Isis is having the ability to be one of the most powerful beings on the face of the Earth and to heal the world with that power, to connect with every soul and to be forgiven. To save one another. It really has nothing to do with wrestling, it has to do with an alter ego, one that I can turn into a way of living. Isis the Amazon throws men and women around for a living, prides herself on the motto “be who you are” and thrives on controversy. I think the best part about being me is knowing that there’s only one of me in the entire world and so long as I stay open minded and willing to learn, I can make the world a better place just by existing.

2. What drives you to be successful?
Everyone who ever told me that I would amount to nothing. Every single person that ever tried to pull me down.

3. Finish this sentence “In five years I will be…”

Sitting along the coast somewhere with a script for Wonder Woman, drinking a double shot Margarita reflecting on the past 5 years of my career that was kick started by my very own Reality TV Show Series.

4. Who are your wrestling idols?

5. What are your passions outside of the squared circle?
Helping abused dogs and all other animals, as well as neglected/abused young women. I volunteer at the local animal shelter and attend many charity events. Here is the donation page that I have set up for The Boston Terrier Rescue of Florida.
6. Do you prefer being a heel or a face?

I prefer being a heel- better control over the match. I hate 5’8″ men trying to

call my “big man/small man match” and other opponents thinking they can give a 6’9″ woman that is stronger than 80% of the population a hip toss or all other ridiculous moves that a “giant” should never take (unless by a fellow “giant”).
7. Do you think chivalry is dead?
In some cases, no. However, most men nowadays believe that since women work, men don’t have to romance a woman or pay the bill for dinner. In fact, to date me, chivalry is a must. I am one of a kind- a true rare, beautiful, exotic woman that can foot her own bills. I don’t have to settle for anything less than a man that can do the same. I deserve surprises, gifts and to be spoiled. In most cases, I return the favor. 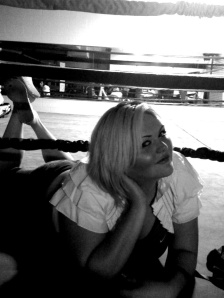 8. What qualities do you expect a Webster Man to have or demonstrate?
Honesty, integrity, intelligence, and charisma. To have something deeper in his soul.
9. What is one secret about women that you think all men should know?
Women are interested in fulfilling their own desires. Don’t get caught up trying to give them the world if they don’t earn it.